A prolific and innovative painter, draughtsman, etcher, and lithographer, James McNeill Whistler had a strong influence on the art and exhibition design of his time. Whistler’s less-established contemporary, Theodore Roussel, was, on the other hand, a self-taught painter who later became known for his landscapes and mastery of color etching. But Whistler was impressed by the younger artist’s work and requested an introduction. Their subsequent meeting led to more than a decade of artistic collaboration and friendship. More than a century later, as we zoom out in time and space, a common network of collaborators and colleagues, families and friends comes into view. That invisible network, however, is not self-evident. For the Whistler & Roussel: Linked Visions exhibition, we needed to find a way to visualize that network. Traditional wall labels wouldn’t be able to tell the story we wanted to communicate.

Rather than building a platform from scratch, we started with a foundation of open-source code (built by Pratt and NYPL). Working with New York City-based interaction designer Michael Yap, we wanted to show the complex network while keeping the design interface intuitive and hyper-minimal.

Visualizing the web of artists is interesting, but we wanted to go one level deeper and show how these artists were related to one another. Rather than go for a design feature that would clog up the network, we adopted an approach that used a filtering paradigm. Visitors filter down based on type of relationship. It’s a design solution that kept the interface clean and accessible. While the artists may have emerged from the gilded age, we didn’t want the web graphics to explicitly cite Victorian England. We went with a minimalist design language inspired equally by Massimo Vignelli and Edward Tufte. One particular quote from Tufte provided inspiration — “Make all visual distinctions as subtle as possible, but still clear and effective.” For a geometric motif, we borrowed a simple feature already built into the exhibit — slightly rounded corners from vintage Roussel frames. For the color scheme, we first explored a palette with five color options. It was four too many. We narrowed down the colors to a few critical selections — white, black, salmon. The salmon color was inspired by one of Roussel’s printed mounts and became a motif in both the digital catalog and the Linked Visions microsite. 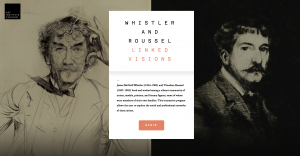 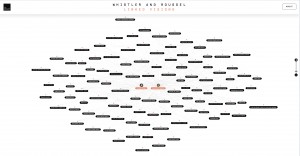 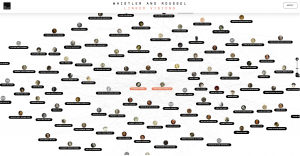 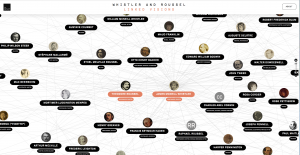 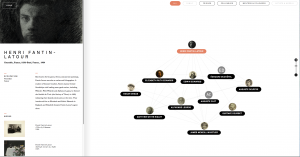 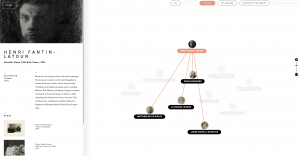 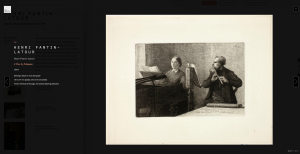